As part of extending its partnership with the Czech National Trust further, Prague College has assigned the following task to its students at the School of Art & Design: to review and improve the overall CNT strategy, while taking into consideration the use of the current online marketing tools such as videos and blogs, and to come up with new ways of improving the CNT website so that it would address the two key audience groups better: the volunteers and the donors. As an NGO, the Czech National Trust relies on volunteers who assist with CNT projects, and on donors who provide the necessary funds for these projects.

Ondřej Fučík, Programme Leader for BA (Hons) in Graphic Design at Prague College, has said the following on the topic of the Prague College/Czech National Trust partnership: „Our School of Art & Design students are extremely talented and creative, and of course approach their work with fresh and modern ideas in order to ensure that their work is in compliance with the newest technology standards. This is one of the main reasons why our students are highly competitive once they enter the job market. Nonetheless, regardless of the quality of instruction at Prague College, there is nothing more beneficial than work on real projects which will help our students understand what a full time job in the field is actually like. The opportunity to work on branding and marketing projects, such as this one which is part of the Prague College/Czech National Trust Partnership, is definitely a priceless work experience for them.“

Dr. Irena Edwards, the founder and Chairman of the Czech National Trust, says „When Prague College approached us with the offer of partnership on specific projects, we immediately saw it as a great opportunity for both parties as there has already been a natural bond between the two entities. Both the CNT and Prague College are Czech entities with strong connections to Great Britain. Nonetheless, the biggest part of our synergy is the fact that both institutions are constantly working on supporting the heritage of the Czech Republic, its beautiful architecture and exceptionally talented individuals. We are looking forward to cultivating our partnership with Prague College further and in various new ways.”

Prague College, one of the top private higher education institutions in the Czech Republic, has entered a partnership with the Czech National Trust (CNT).

The partnership should bring multiple exciting opportunities and benefits to both parties involved. It will start with a team of Prague College School of Art & Design students reviewing the entire CNT branding strategy and the current position of the Czech National Trust on the local market, and continue with these students devising and presenting their suggestions for upgrading the CNT marketing policy, materials and the website while making the website more user-friendly at the same time.

The Czech National Trust will be joining the Prague College Industry Network in return. This will provide Prague College students with the opportunity to intern at the CNT outside of term time, and will enable the two institutions to further cooperate on other marketing and educational activities.

„Entering this partnership has always felt very natural to us, mainly because both Prague College and the Czech National Trust are Czech institutions with very strong connections to the United Kingdom. Prague College is the only higher education institution in the Czech Republic offering courses taught in English which holds accreditation from a British university (Teesside), while the Czech National Trust has been founded with the very same mission and vision as the British National Trust. We always find it very beneficial when we can provide our students with real work opportunities, and we are sure that our Art&Design students as well as our Communications students will be very excited and interested in this work opportunity.“ – Douglas Hajek, Prague College Founder and Director

„We are absolutely thrilled about this partnership. Not only it will give us the opportunity to benefit from the extensive knowledge and expert skills of Prague College students, but it will also give us the opportunity to show the younger generations the importance of supporting one’s cultural heritage in both practical and educational ways.” – Dr. Irena Edwards, CNT Founder and Chairman 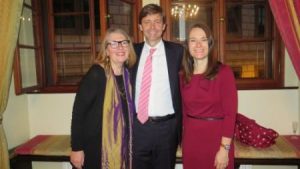 As many as 80 guests have attended the evening reception, which was also a fund-raising event. The guests have made donations and pledges amounting to the total of 400 000 CZK which will be used for our pilot project in Zdislavice, for creation of a nature trail and for our Prague projects.

Among the reception guests were Jan Thompson, British Ambassador to the Czech Republic, Catherine Leonard, Secretary General of the International National Trusts Organisation (INTO), and almost all our main donors and supporters: Eduard Kučera (Avast), Magdalena Součková (Ernst&Young), Milan Šimonovský (Sigma), Eliška Kaplický (Chair of the Prague Culture and Monument Care Department), and many other CNT volunteers and friends.

A new group of CNT volunteers, whose main aim is the conservation of cultural heritage in the capital city of the Czech Republic, has been founded in Prague.

Its members are planning a wide range of activities. One of these is a series of projects aiming to repair and restore small architecture features in the streets, to replace statues which have been removed or lost and to restore certain parts of Prague streetscape. The curator of this series of projects is Zdeněk Lukeš, Czech architect and art historian. 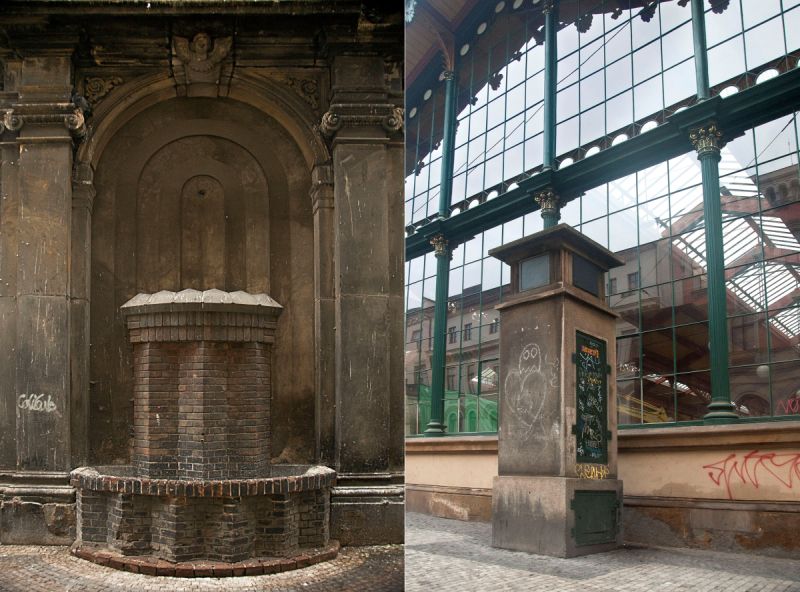 The Czech National Trust has made a contribution of 122 000 CZK to the rescue of the Chinese Pavilion, a construction built in the Romanticist architectural style in the 19th century, situated in a UNESCO site called Kroměříž Castle Garden. The sum is the proceeds from a public fund-raising campaign so far which the Czech National Trust organised in cooperation with the National Heritage Institute. Donations can be made via bank transfer to the transparent account with the ČSOB bank – the account number is 270472892 / 0300. The fund-raising campaign is still up and running, as the target amount to be raised is 700 000 CZK.

Thanks to the efforts of the Czech National Trust and other donors, the Chinese Pavilion will be safe this winter. The first phase of the rescue project has just finished and it consisted of two parts: a reparation of the island banks and a basic reconstruction of the wooden and metal structures. The total cost of the first phase of the rescue project was more than 250 000 CZK. We are immensely proud that the proceeds from our fund-raising campaign have covered almost half of this cost and we would like to use this opportunity to extend our sincere gratitude to all our donors!

CNT representatives had the unique opportunity to present the organisation, its mission and its pilot project at an event at the St. Johanns Club in Vienna. The event was organised in cooperation with Czech Tourism and was attended by Irena Edwards, Martin Krčma, Richard Podstatzký and multiple renowned members of the Austrian art scene. The event was opened by Jan Sechter, Czech Ambassador to Austria.

We are pleased to announce that the Czech National Trust has officially launched on June 18, 2014. The launch event was a festive evening reception at the Reform Club in London, United Kingdom. Among the reception guests were His Excellency Michael Žantovský, Ambassador of the Czech Republic to the United Kingdom of Great Britain and Northern Ireland,  Zdeněk Novák, Deputy Minister of Culture of the Czech Republic, and representatives of the British Parliament as well as representatives of multiple heritage conservation organisations, including Sir Simon Jenkins, CEO of the British National Trust.

His Royal Highness The Prince of Wales, His Excellency Emil Brix, Ambassador of the Republic of Austria to the United Kingdom of Great Britain and Northern Ireland, Helen Ghosh, Director General of the British National Trust, Simon Molesworth, President of the International National Trusts Organisation, and many others have all expressed their support for our organisation in writing.

CNT builds upon the tradition and principles of The National Trust, Britain’s largest NGO, whose main goal is to preserve, protect and maintain the British cultural and natural heritage.

As part of her speech Dr. Irena Edwards, founder and chairman of the Czech National Trust, has said “Our biggest challenge lies in raising the Czech public awareness of the natural and cultural heritage in the Czech Republic, and also of the historical monuments which are often neglected despite being situated right in one’s area of residence. We would also like to help re-establish the sense of national pride among Czech people in relation to what their ancestors have built and created in the past, and to help conserve and protect this precious heritage for generations to come.” Dr. Edwards has also emphasized the international significance of Czech historical monuments and the CNT goal to help acquire the funds necessary for their restoration and protection, both locally in the Czech Republic and abroad.

CNT Director Eva Žallmannová has presented the pilot CNT project as part of the event, which is the reconstruction of the Marie von Ebner-Eschenbach tomb and chapel in Zdislavice, a small town in the Zlín region. The Czech National Trust is planning to restore this extraordinary site and to open it to the public in 2016 to commemorate the 100th anniversary of the death of one of the most remarkable figures of 19th century European literature, Marie von Ebner-Eschenbach, whose Czech origin and international significance represent the common cultural heritage of the Central European nations.

A collection was also part of the evening reception. The total of £ 22,000 (770,000 CZK) has been raised and will be used for the implementation of the pilot CNT project.

Photos from the event can be viewed here: http://jollythompson.dphoto.com/#/album/83708t 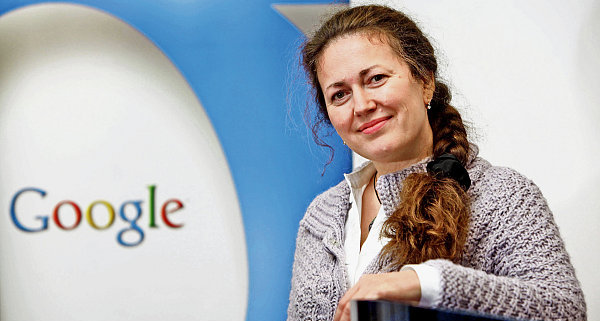 CNT welcomes a new Social Media Consultant, Taťána le Moigne. Taťána holds a Master‘s degree in Business Management and Software Development from the University of Economics, Prague. She worked for multinational companies, such as Digital Equipment Corporation (today’s Hewlett-Packard) and Microsoft. She has been the Country Director for Czechia, Slovakia and Hungary since 2006 and has recently become a CNT Social Media Consultant, which has been a great honor for the entire CNT team. Thank you! 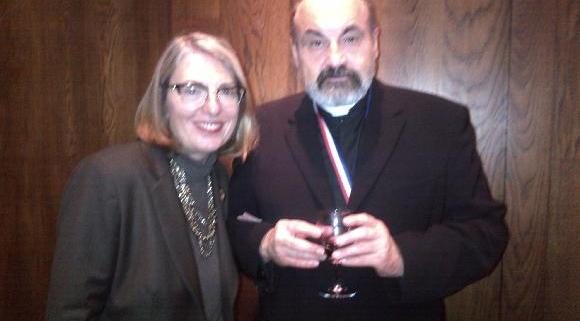