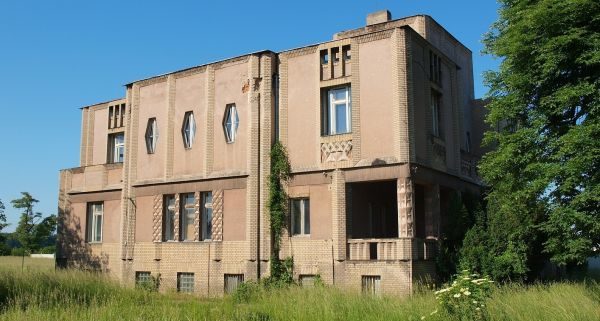 Villa Benies is situated in Lysá nad Labem, a town in the Central Bohemia Region some 40 kilometres away from Prague, in a neighbourhood called Litol.

Michael Benies (1854 – 1924) was an eminent personality in the local sugar industry. He was forced to leave Czechoslovakia before the outbreak of World War II, and the cubist villa was nationalized by the new regime shortly after the war ended. Following the Velvet Revolution in 1989, the villa was sold to a German company called ARS Altmann Praha spol. s.r.o.

Villa Benies was designed by architect Emil Králíček in 1912. The villa itself is a two-storey brick building with a flat roof originally designed to be a rooftop garden. As it was one of the first buildings with a flat roof in the Czech Republic and the very first building in the country designed to have a rooftop garden, the villa was declared to be an important architectural landmark by experts in the field in the early 2000s.

The villa is one of the few cubist buildings around the world and also one of the very few preserved Czech cubist buildings in which one can still find most of the examples of the cubist architectural style in real life, as well as multiple original decorations. As has been already mentioned, Villa Benies was one of the first buildings to have a flat roof. The fact that the flat roof was designed to be a rooftop garden is truly unique, as such design was exceptionally progressive for the era. Exquisite and complex interiors are to be found inside the building, as well as extraordinary cubist columns and decorations. The spacious staircase hall is lit by a skylight in the shape of the Star of David. The windows in the building have an unusual hexagonal shape and many other features in the villa are of shapes that have been derived from the shapes and structures of sugar crystals.

Villa Benies used to be an integral part of the local community in the past, mainly due to the fact that it was closely linked to one of the main sources of livelihood in the region. These days not only the locals realise the historical and cultural singularity of the building, but also many historians and architects in the Czech Republic. This is the reason why it has officially been declared a cultural heritage site in 2004. There is a group of volunteers in Lysá nad Labem who focus on saving and preserving the villa. For many years they have been trying to raise public awareness of the cubist building and to organise events in support of its preservation.

Nonetheless, in order to ensure further and successful operation of the villa, a thorough reconstruction which would cover the roof, electricity, plumbing and plastering is needed. An architectural plan of such reconstruction has already been put together by a Czech architect David Vávra. In addition, the local plan of the town also includes the possibility of future developments of this site for cultural purposes. Following such reconstruction, Villa Benies could become a community centre. It could host exhibitions or it could become a cubist museum that would have a display dedicated to the architectural works of Emil Králíček, while the area surrounding the building could serve as a small park in which other public events could take place.

The current owners of the villa have already launched the reconstruction project as part of which the roof has already been renovated. Our goal is to assist them further by providing guidance and consultation in terms of finding the remaining funds necessary for a successful completion of the reconstruction project or, if need be, to assist them with making the landscaping in the surrounding park happen.