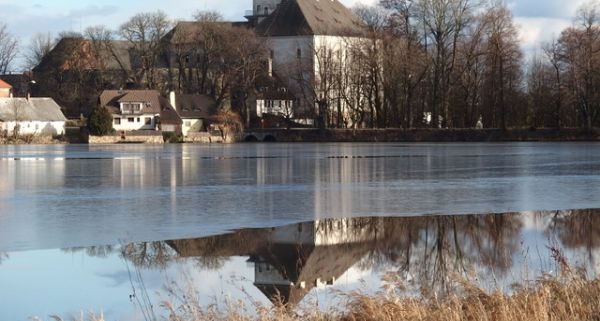 Rožmitál Castle is situated in Rožmitál pod Třemšínem, a town in the Central Bohemian Region around 75 kilometres south west of Prague. The castle we know today lies on the grounds of what used to be a castle built out of mud in the middle of the 13th century by Oldřich from the Buzic dynasty, who was also the first noble to use the predicate ‘of Rožmitál’. The mud castle and the surrounding demesne were later acquired by the Lords of Rožmitál in the 15th century. It was Zdeněk Lev of Rožmitál who had the main building of the current castle built. After his death in 1535 his sons sold the indebted property to a new owner.

In 1550 the castle became the property of Florián Gryspek, a nobleman and a royal clerk, who had the castle reconstructed in the renaissance style. The castle remained their property until 1622 when it was confiscated by the Holy Roman Emperor Ferdinand II. The castle was then gifted to the Prague Archbishop Arnošt Vojtěch of Harrach just one year later and remained the property of the archiepiscopate until World War II. The castle has acquired the status of a cultural heritage site of the Czech Republic in 1958 and it has also been classified as an endangered historical site.

The castle rises above the ponds near the deep Brdy forests quite close the Prague and it is closely connected to the most important events in Czech history. Its early-renaissance style as well the remainders of the former gothic architecture are significant and charming architectural examples of the different historical eras. Unfortunately, the current owners have not invested in the maintenance and reconstruction of the castle and even though the castle has been secured by grouting, it is still not a safe site as the shingle roof has been vastly damaged. A complete reconstruction would offer multiple new and interesting opportunities in terms of how the castle and the surrounding park could be used.

The Czech National Trust has been trying to help in terms of maintenance and cleaning of the castle grounds, the courtyard and the surrounding park and is planning to organise a set of working holidays this summer. The essential and much needed reconstruction, however, remains in the hands of the current or the future owner. Through consulting, the CNT has been trying to create the best possible conditions for the owners to start dealing with this complex situation so that the castle could be saved and preserved for future generations.

Maps were disabled by the visitor on this site. Click to open the map in a new window.